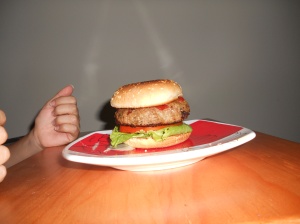 My husband loves my cooking. I usually make lunch everyday. So, on weekends, we love going out and taste different things.  However, there is always a Sunday in which we are feeling lazy to leave the house, so we just watch TV and movies. On those days, Hubby knows I may cook somehow unhealthy food… so after watching a food tv show with stuffed burgers, we decided to make our own!

Our experiment turned out to be pretty tasty, so I highly recommend this if you like cooking, burgers and pampering yourself with delicious strong taste and a bit of fat!

This is a deluxe burger which is more than a special treat!

1 slice of bread damped in milk

a piece of chopped onion

How to do it

Don´t forget to wash and disinfect your lettuce and tomato! 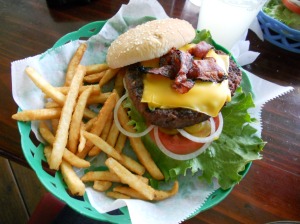 Last saturday Hubby and I were planning on going to a tavern, but when we got there it appeared to be an all men’s place. So, we drove around to see which would be a nice place to have lunch.  We were driving by one of the main? streets in Escazú, when we realized a place we wanted to try because it’s always full was today almost empty (it was too late for tico-timed lunch).

Henry’s Beach Café is a medium-large sized restaurant with beach like decoration.  The terrace is made out of wood and the tables are surrounded by umbrellas that simulate you are sitting on the sand under the sun.  Some tables are decorated with sunscreen bottles and the walls have surfboards.

There were only two other tables occupied when we got there, and two other couples arrived a bit later.  Their menu is not very extensive, compared to other restaurants we’ve visited here.  They have appetizers, salads, burgers, sandwiches and some entrees that are a bit more complex.  The service was a bit slow, but manageable.  We both had burgers. I ordered the bacon-cheese burger in the photo while my husband asked for one with black pepper and blue cheese.

Both burgers were big enough, served with lettuce, tomato, about a pound of pickles and onions, and a few french fries.  My burger was ok, though I think it could use a bit of spices and salt for flavor.  Hubby’s burger looked a bit disgusting.  The blue cheese was mixed with what I presume was light cream and mayo, so the taste was not strong enough.  I had a bite and it was ok, but nothing more.  He also thought that the meat lacked taste. The fries were a bit better.

Saturday night we got together with some friends who stated that buffalo wings is what is actually good there, so maybe we’ll give them a try someday… on the mean time I’ve come again to the conclusion that not because it’s packed it is a great restaurant.

Unauthorized duplication and/or use of the material and photographs published in mylunchanddinner is strictly prohibited. Excerpts and links may be used provided that full credit is given to mylunchanddinner and appropriate and specific direction to the original published information.