This was the second week of the Jamie Oliver Challenge. We were happy to make the book’s second recipe since the Broccoli Orecchiette had turned out so delicious. This week we planned a bit ahead, not enough though because I couldn’t find the base to make the dessert =(. My husband was really happy about it because he is trying to stay slim, but I was really sad. Anyway, it seems like next week I won’t owe you the dessert, cause it looks easier. The menu was thus reduced to Pregnant Jool Pasta and crunchy red endive and watercress salad.

Anyway, I made the list of things we needed, and of we went to the Saturday’s Farmer’s Market that opens near our house. I bought everything excitedly. However, I didn’t find all the ingredients.  I have to be honest for a country that sells a bunch of American, German and French groceries, I miss a bunch of important ingredients for my food preparations. So, this is what I had to exchange:

I didn’t find watercress either, but no exchange was made for it.

Cooking the recipes was fun. I was working together with Hubby, so we would bump into each other while washing the ingredients or when peeling the vegetables. It was really something! So, the first thing the recipe calls for you to do is the pasta sauce. I was fascinated… chopped carrots, celery, sausage and chives along with spices plus cubed tomatoes. I would have never guessed all this was in the sauce if I had not made it myself. The result when cooking the sauce was a delicious, irresistible smell!

While the pasta was getting cooked, I worked on the salad. I used about 4 leafs of lettuce, and a bunch of arugula. I mixed everything well, and added the parmesan cheese. The only actual ingredients of the recipe used were the arugula, parmesan cheese and the dressings. Kind of sad, but one must work with what we had. And it turned out to be pretty good anyway.

When the pasta was done, we immediately passed it to the sauce pan, mixed it and then to our plates! I added some parmesan for 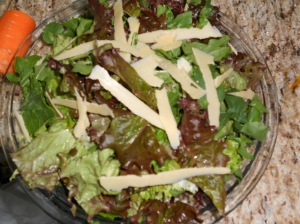 taste. The salad was tossed next to the salad.

I was really amazed by the taste of the pasta. I had never added to carrots to a sauce, which made it thicker, but also interesting. The chives gave a lovely taste to the sauce, but it was discreet enough not to overshadow the rest of the ingredients. The tomato also gave a nice touch. Overall, the pasta was super delicious! Hubby ruled it was even better than last week’s. The salad had an interesting taste with the combination of the soft tasting lettuce with the strong taste of arugula. Parmesan cheese and olive oil and lemon dressing gave a balance to it all.

Basically, I have once more come to the conclusion that Jamie Oliver is really something… till next week with the cauliflower macaroon!

PS. If you are wondering about the dish’s name, the pasta gets pregnant when the sauce gets inside the penne while being mixed. Super good!

Unauthorized duplication and/or use of the material and photographs published in mylunchanddinner is strictly prohibited. Excerpts and links may be used provided that full credit is given to mylunchanddinner and appropriate and specific direction to the original published information.